Potsdam, New York. 12-year-old Garrett Phillips was strangled to death on Oct. 24, 2011, at the 100 Market St. apartment where he lived with his mother, Tandy L. Cyrus, and younger brother, Aaron. Oral Nick Hillary, 42, a former Clarkson University men’s soccer coach, who dated Garrett’s mother, was arrested for his homicide, put on trial for second-degree murder and acquitted in 2016. Nick Hillary had been painted by prosecutors as an obsessive ex-boyfriend of Garrett’s mother, who broke off a yearlong relationship after her son told her he did not like Nick. According with the DA Nick had killed Garrett in retribution for the breakup.

What we look for in these excerpts is for Nick Hillary to issue a reliable denial.

A reliable denial has 3 components:

If a denial has more than 3 or less than 3 components, it is no longer reliable.

“I did not kill Garrett” followed by “I’m telling the truth”, while addressing the denial, it is more than 99% likely to be true.

A deceptive person will alter his denial to avoid a direct lie.

Here is what Oral Nick Hillary said to the journalist after his arrest:

Note the unnecessary closing “that’s all I have to say” which seeks to stop the flow of information.

Some excerpts from an interview released by Nick Hillary to 20/20:

Journalist: First of all, whose idea was the break up?

Nick Hillary: Uhm… I mean… the idea was… both of forces… I mean… I… I believe…

“Uhm” and “I mean”, repeated twice, are pauses to think. These pauses are noted as sensitive. To answer with a pause is like to answer with a question.

Note the stuttering “I”, a signal of increase in tension.

“I believe” is a qualifier that shows a lack of conviction.

The question “whose idea was the break up?” is sensitive to him.

Journalist: She said she was the one who broke up.

This is not a question.

Nick Hillary: Uhm… I… I think, was the two of (inaudible), we made a decision.

“Uhm” is a pause to think and is noted as sensitive.

Note the stuttering “I”, a signal of increase in tension.

“I think” is a qualifier that shows a lack of conviction.

“We made a decision” is non-specific because he is referring to “a decision” not to “the decision to break”.

The theme of the “break up” is sensitive to Nick Hillary.

Journalist: There are people who’re saying they know that the reason you and Tandy broke up was because Garry wanted you out of the house.

The journalist shouldn’t have asserted but asked why he and Tandy broke up.

“Not true” is not a reliable denial.

Journalist: You are saying there wasn’t tension between you and Garrett?

Nick Hillary: No, no.

Note that “No” is repeated. He has a need to persuade.

Journalist: That you didn’t argue?

“No, we didn’t” in response to “you didn’t argue” is not a reliable denial, as it is parroted. “argue” is also missing.

Note that he repeats his denial two times to persuade.

Journalist: Were you aware that police officers were at the game videotaping you?

Hillary is unable or unwilling to answer with a “No”.

The word “absolutely” is sensitive, he has a need for emphasis.

Journalist: (…) 24 hours later you were already prime suspect, number one.

The journalist likes to assert.

Journalist: Did you get out your car once you parked?

Nick Hillary: No, I didn’t.

“No” is a good answer. Each word after the word “No” are important to us because in innocency there is no need to explain.

“No, I didn’t” in response to “Did you get out your car?” is not a reliable denial, as it is parroted. Moreover “get out my car” is also missing.

Nick Hillary: Because it was raining, I was waiting for the rain to break, I think it was probably about halftime in the game at the time and I was waiting, waiting, just didn’t brake and I decided: OK, I will just have to continue with my day.

Journalist: Did you see Garrett skateboard by?

Nick Hillary: No, I didn’t.

“No, I didn’t” in response to “Did you see Garrett?” is not a reliable denial, as it is parroted. “see” is also missing.

Journalist: Because, obviously, surveillance tape shows that he did to go home.

Journalist: And it is a pretty straordinary coincidence.

Nick Hillary: Pretty much so.

Journalist: Given what happened.

Journalist: Why did you turn left?

Nick Hillary: When I made the left my intentions were to get to the office and I quickly realized I need to make provisions for my daughter at home.

Hillary says “I need” because he is not fishing in his experiential memory.

During an interview with investigators, when Hillary was asked where he went after leaving the parking lot, he said:

Investigator: Where were you going?

Nick Hillary: I mean, I could make either a left or a right and still go home.

Note the pause “I mean”, he needs time to think before answering. The question is sensitive to him.

Investigator: Well, Mr. Hillary you told me under oath you didn’t stop anywhere on your way going home, correct?

Nick Hillary: That is correct.

Investigator: And your home would be in the opposite direction of where you turn, correct?

Nick Hillary: Like I said before I cannot recall turning left or right.

Note “Like I said before”, to avoid the stress of experiential memory he uses the ‘self reference’ of what he said before.

See the inconsistency, he told the investigator that he couldn’t “recall turning left or right” and to the journalist that his “intentions were to get to the office”.

More of the interview with the journalist of 20/20:

Journalist: At what time did you get home?

Nick Hillary: We spoke for a little bit, talked about dinner arraignment.

Journalist: What she was going to cook for dinner?

Nick Hillary: Some kind of macaroniii with some kind of tuna casserole.

We know that he didn’t make any dinner arraignment with his daughter because at 6:30 she sent him the following message: “What’s for dinner?”.

Journalist: Did you kill Garrett?

“No, I didn’t” in response to “Did you kill Garrett?” is not a reliable denial, as it is parroted. “kill Garrett” is also missing.

Journalist: Did you hurt him in any way?

Nick Hillary: I have absolutely noothing… to do with what has happened to Garrett.

“I have absolutely noothing… to do with what has happened to Garrett” is an unreliable denial. Moreover, he adds emphasis to the answer through the word “absolutely” showing a need to persuade. He also adds emphasis to his answer underlying the word “noothing” by repeating the letter “o”.

Journalist: Why do you think there is this depth of fervor to get you?

Nick Hillary: Because, I think, I have crossed the line… of being a black man… honestly.

“I think” weakens his answer.

When Hillary says “I have crossed the line” I believe him.

Note the place of the pauses.

The word “honestly” is often associated with deception.

Journalist: Do you think is all about race?

Nick Hillary: It is… I sincerely think is all about race.

He is unable or unwilling to answer with a “Yes”.

“I sincerely think” weakens his answer.

Journalist: Did you go to their apartment that day?

Journalist: You didn’t follow that boy home and go in that apartment?

“No, I did not” in response to “You didn’t follow that boy home and go in that apartment?” is not a reliable denial, as it is parroted. “follow Garrett home” is also missing.

Journalist: You didn’t jump out of the window and injured your ankle trying to escape?

Nick Hillary: (giggling) No, I did not. I absolutely have nothing… to do with… the death of Garrett Philipps.

“No” is a good answer. When “No” is not alone we count each word that follows weakening the response.

Note that he is unable or unwilling to say the words “murder”, “kill” or “strangle”.

Moreover, he adds emphasis to the answer through the word “absolutely” showing a need to persuade.

An excerpt from an interview released to 20/20 after the sentence.

Journalist: At the center of this case there is a dead child, is a child you knew quite well, what do you say to Tandy to his little brother Erin who was subbing in the court room this morning?

Nick Hillary: I’m extremely, extremely sorry for their loss and I wish I could have been of more comfort to them.

In Statement Analysis, we flag the word “sorry” or “I’m sorry” any time and in any place it appears, for whatever reason. “I’m sorry” is often an indicator of a form of regret that usually enters the language of the guilty.

He didn’t issue at any time a denial of the action and showed multiple times a need to persuade. He cannot rely on the “Wall of truth”, an impenetrable psychological barrier that commonly leads an innocent de facto to few words as an innocent who “didn’t do it” has no need to convince anyone of anything.

He has guilty knowledge of what happened to Garrett Phillips.

He got away with murder.

On April 5, 2019, in the Dominican Republic, Francisco Polo Mateo, 25, sexually abused and murdered Yarinelis Domínguez Rijo, his ex-girlfriend’s 12-year-old daughter. He attacked the girl after the victim’s mother, Jenifer Rijo Rojas, kicked him out of their family home and filed a harassment complaint. 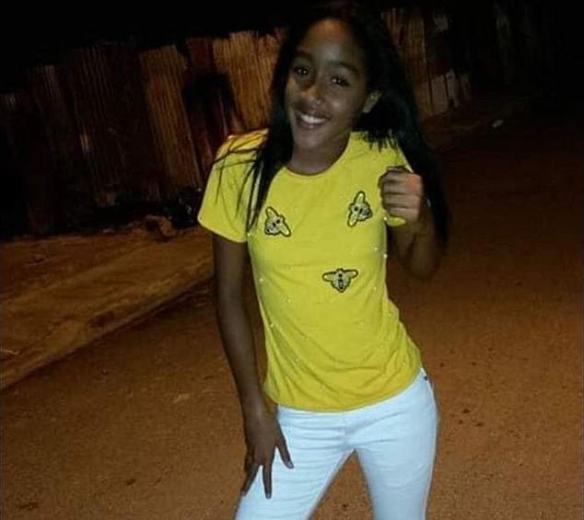 Yarinelis’s body was found on a bed of the apartment she shared with her mother. After the murder Francisco Polo Mateo wrote the following message on the wall: “It pains me that I will not be there to see you suffer too, but I am happy because of what I did to you”.

The message on the wall